As you all know, I went a little crazy with shaker cards a few weeks ago.  Because of that, I have one to share... 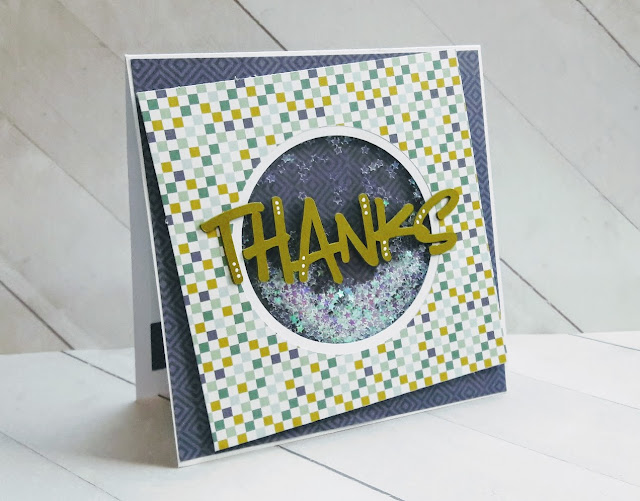 I made this for one of my kids at church.

Side note.... I have no kids of my own.  Every Sunday, since I was 15 years old, I have taught the kids at church in either Sunday School or Children's Church.  Because of this, I am super attached to my kids. A lot of them I have known since birth or just after.  I remembered as I wrote that line, 4 of my "kids" will be leaving for the military over the next 6-8 months.  Cue the tears.  They aren't really kids anymore. And even though I didn't bring them into this world, I still claim them as mine. And I don't want them to grow up.  And I don't want them to move away.  And I cry every time I think about it, so let's move on.

Anywho...  I made this for a kid who helped me out and went above and beyond.  I didn't have a template, I just picked a fun font and cut the squares and circles with my Silhouette.

I added dots to the font with my white gel pen and layered 3 of the word "thanks" to make it thicker. 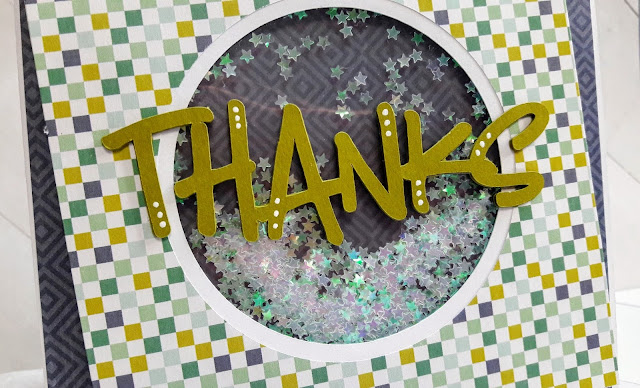 I used my fuse tool to make a pocket, then added the iridescent stars to fill the pocket.  Aren't they fun?

That's it folks!  This card was simple and could easily be reproduced just using different papers and fonts.  I thought I'd start sharing links to the supplies I use, in case you are looking for them.  Here's what I used in this card:

Please use the links above and help support Pink and Paper
1 comment:
Email ThisBlogThis!Share to TwitterShare to FacebookShare to Pinterest

The last couple of weeks have been a bit chaotic at Casa de Garrett, so I've missed a couple of Fridays. I was going to wait until the end of the week, but who says free fonts can only come on Fridays?

I'm such a rule breaker. 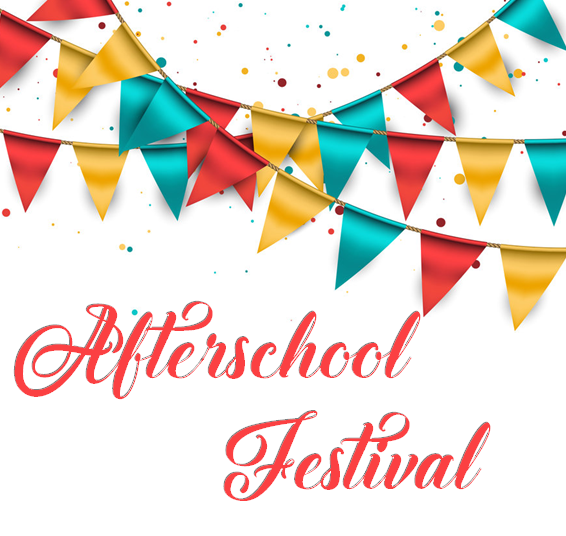 You all know I love swirly fonts and of course, this one is fab.  You can get it at Dafont here: Afterschool Festival

Cheryl
No comments:
Email ThisBlogThis!Share to TwitterShare to FacebookShare to Pinterest 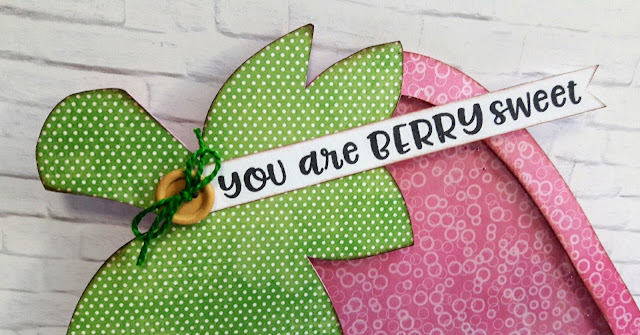 I have another shaker card to share with you!  I just can't get enough of them!

This is one I made a few weeks ago during my all day card making party (I was the only one at my little party...LOL!).  I love this giant strawberry! 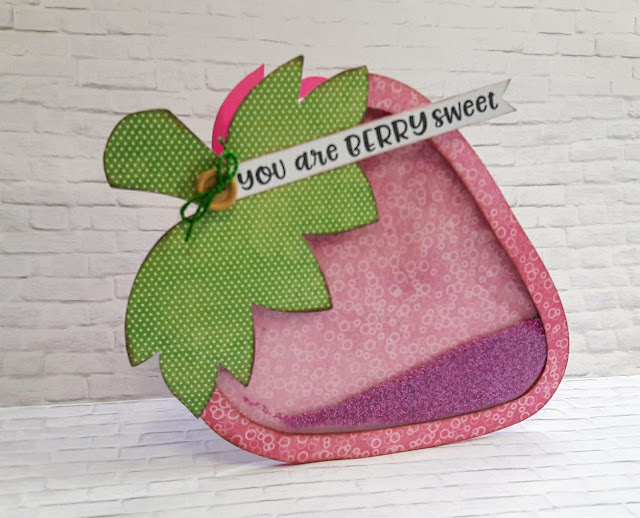 This card was super easy.  I found a drawing of a strawberry online and pasted it into my Silhouette software.  I traced it and smoothed the edges to make a cut file.

I again used my fuse tool to make a pocket for the shaker part of the card and filled it with lovely pink micro beads!

Do you love shaker cards as much as me?  If so, please post a pic on Pink and Paper on Facebook and let us all see your creativity!!

It's fall y'all!!  That means it's time for some Halloween fonts!

Get the Mrs Monster font HERE.

Enjoy!
No comments:
Email ThisBlogThis!Share to TwitterShare to FacebookShare to Pinterest 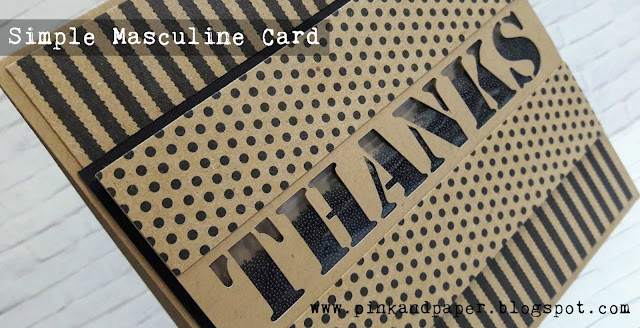 I love making cards.  I think it has to do with the fact that I love giving people gifts.  Like, seriously love it. I have never read the book, but I'm pretty sure my love language is gifts.  It's not always feasible to give a gift, but you can always find an occasion to give a card!

I haven't made a card for anyone in over a year. For me, that's an eternity.  I used to make a ton of cards.  I tried to make my mother-in-law a birthday card a few weeks ago and it was a disastrous mess, so I quit and bought her one.  [sad face]

I wanted to say thanks to some awesome teens in our church for helping me out, so I decided to see if I could get the creative juices flowing today.  And I made 5 cards! 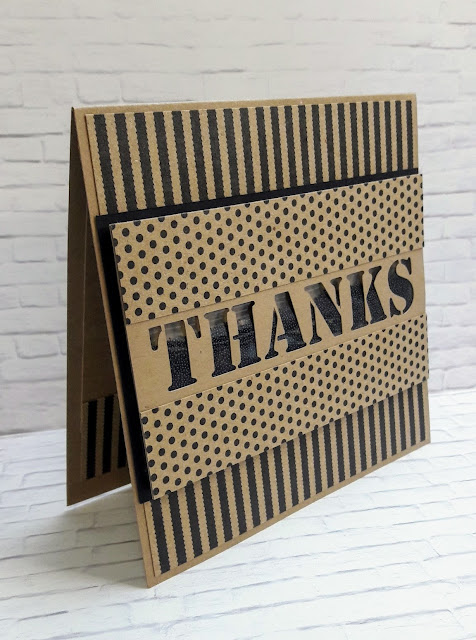 I've said it before and it's still true - Masculine cards are HARD to make. I always want to sparkle or glitter or shimmer it or something.  My hubby picked out this paper at Hobby Lobby a while back.  He said it's his favorite paper I own.  Poor guy... he has bad taste - except in women!  Actually, I am glad he talked me into buying it because it's perfect for simple cards. 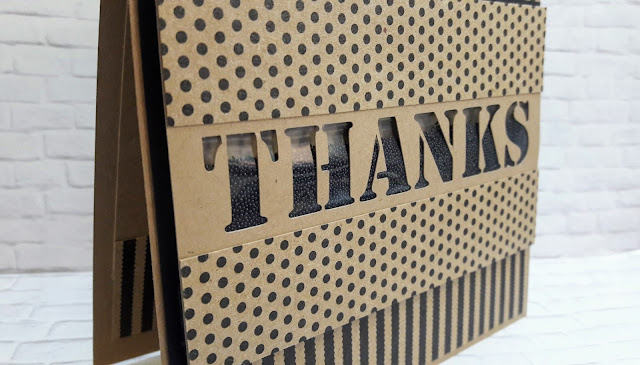 I used my fuse tool and page protectors to make a pocket, then added micro beads to fill it up.  I cut out the sentiment using my Silhouette, then put it on with foam tape. 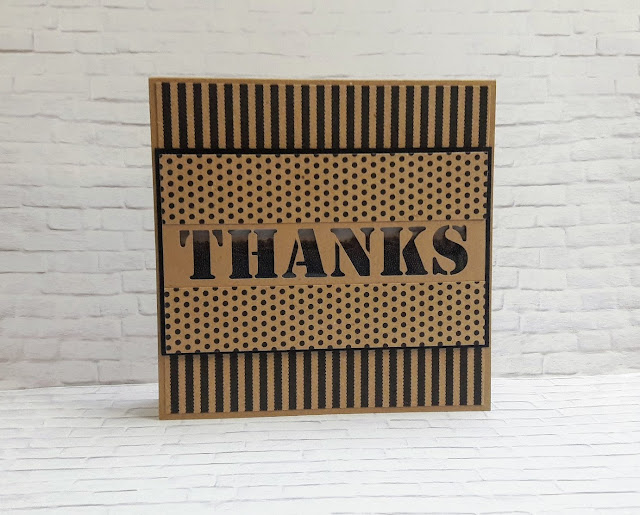 It's quite plain and perfect for the recipient!  The young man I gave it to is definitely no-frills, so this was right up his alley.  And he enjoyed playing with the shaker part!

Once I came up with the general idea, I made several. I would suggest whenever you make a card, always make a couple, then you'll have them on hand when you need one fast. 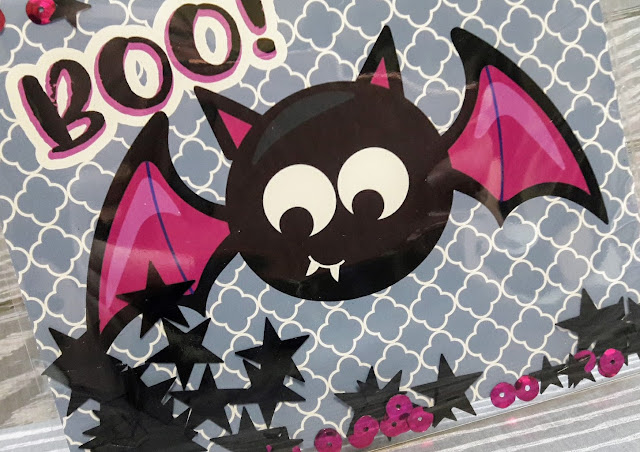 Fall is officially here. Except in Oklahoma.... where it was 90 degrees today!  What the what?

I guess it's still "officially" fall but I could really go for cool weather.  I hate heat.

Anywho, with the arrival of fall, we know Halloween is just around the corner.  Not having kids, I don't have to make costumes or deal with trick-or-treating, but I still love making goodies for my co-workers and friends.

Since I got my fuse tool, I have been OBSESSED with all things shaker.  Shaker cards, shaker bookmarks, shaker dashboards for my planner....  So why not do a shaker Halloween treat bag?

If you're not familiar with a fuse tool, check this out:

Now that you are in love with the fuse tool like I am, what can you do with it?  I have a simple idea that will be a hit with all your pals.  Promise!

All you need is a printer, some paper and some 5x7 cello bags. (I got mine from Amazon HERE) 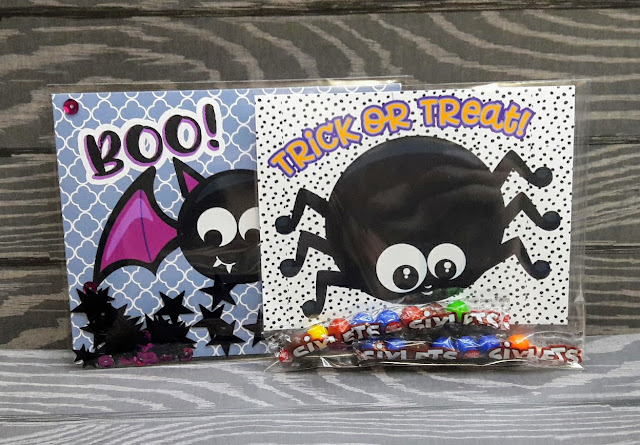 I guess you could call these "treat packs"?  I have no idea. I just think they're cute.  I basically took a printable card, put it in a 5x7 cello bag, added embellishments and/or candy and sealed the end with my fuse tool. 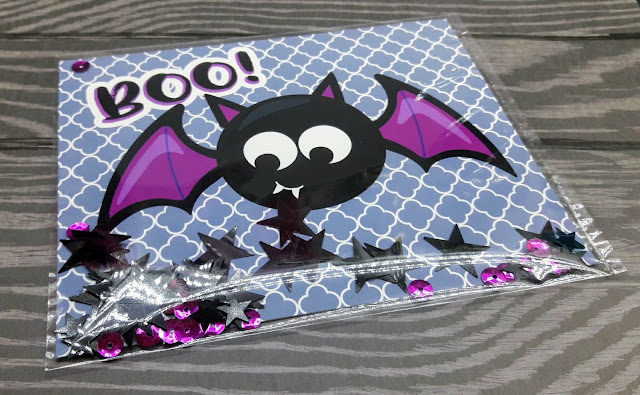 With my limited photography skills, it's very difficult to photograph a shiny, flimsy bag.  I kept getting a glare, so I just laid it down and hoped for the best.  If you want to give a treat without candy, you can add some sequins or die-cuts and just write a little note on the back. 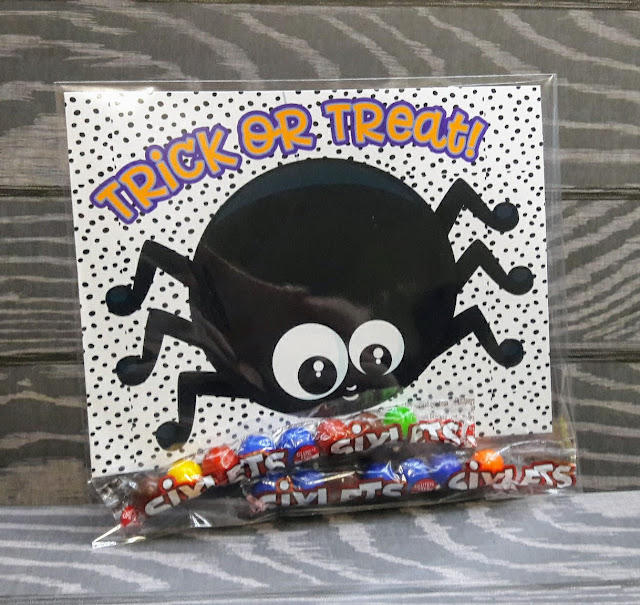 In this one, I added a couple packs of Sixlets.  My hubby loves them.  I find the crunchy shell nasty, personally. 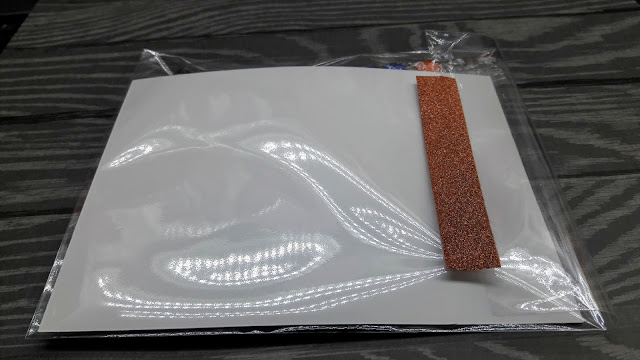 If you don't have a fuse tool, but still want to make these, you can easily fold them over and seal the back with some cute (and glittery!) washi tape.

Now for the best part - a Freebie!  I created these cards to share with you all.  Just click the link under the picture to download the PDF document for yourself. 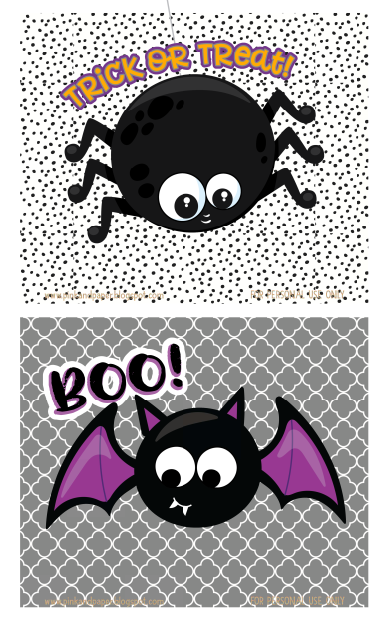 Happy Creating!
No comments:
Email ThisBlogThis!Share to TwitterShare to FacebookShare to Pinterest 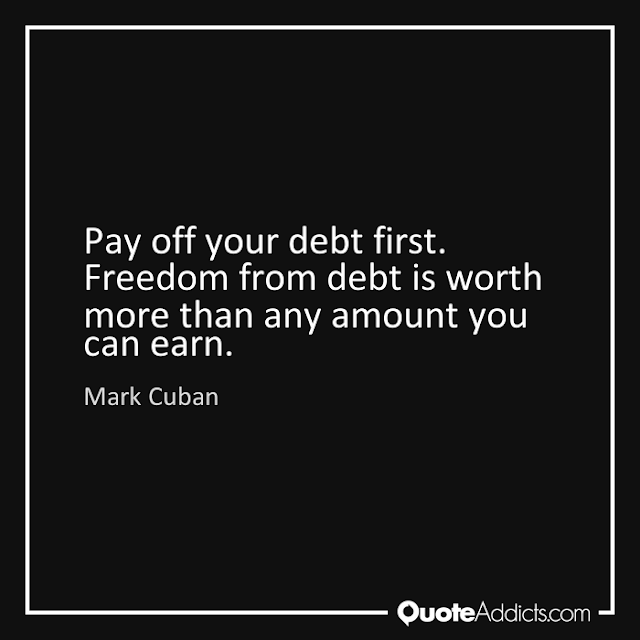 (Picture me dancing around and singing those words at the top of my lungs..because that's what I'm doing.)

Since I've shared some of our debt situation with you guys, I knew you'd want to know that I just paid off a medical bill! Let me tell you why I'm so happy...

After The Great Meningitis Outbreak of 2014, we received 14 medical bills in the months that followed.

I had just gotten over this horrible illness (and had a "traumatic brain injury" as I'm told), so to say I was overwhelmed was an understatement.

I called them all, made arrangements to pay what I could, and prayed.  Insurance ended up covering a few of them and one actually wrote off the balance I owed.  Fast forward to 2017.  After way too many payments, we're down to 3 bills.

And today, I paid one of them off!! 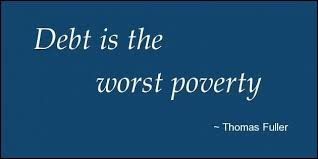 This has been a long road and hasn't been easy.  Paying off debt SUCKS!

It's one thing to pay off debt that you acquired because you bought too many purses. But having to pay bills because you start having convulsions in your living room floor, go into a comatose state and end up in the ICU is a whole other ball game.

I pouted for a bit.

I had a pity party because "Why did I have to get Meningitis?".

I cried A LOT.

Then, I decided to be a grown up.  Things do not go as planned.  Life happens.  And sometimes it sucks and we just have to accept it.

So, I added them to my list of debts and started paying.  A few were small enough they went away quickly.  But these last 3 have been hanging on for dear life. 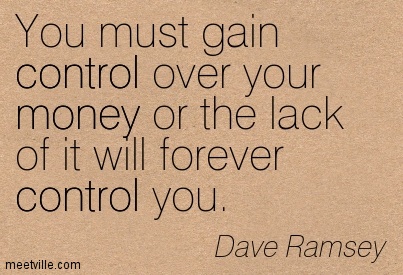 Debt is the worst.

If you think you MUST have a brand new, fancy car or you can't live without that designer couch...don't do it!  It's not worth it.  Take if from someone who learned the hard way.  Since we paid off our "BIG DEBT" (as we not-so-lovingly called it), we still owe on a few things. BUT not having that big payment looming over us every month is the most amazing feeling ever.

I am still not always perfect on my budget.

I sometimes spend money when I shouldn't and have to swap things around to cover it.

I sometimes have an urge to charge something because I just want it soooo badly.

But I'm trying.  Every single day.  And Charles and I are daily making the conscious decision to NEVER go back to where we were. 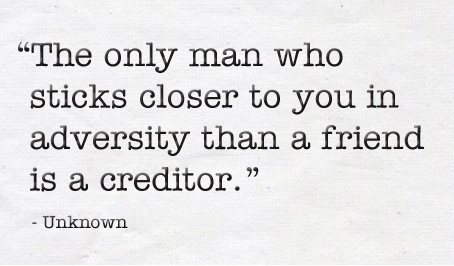 
No comments:
Email ThisBlogThis!Share to TwitterShare to FacebookShare to Pinterest

As you can tell, I lean toward swirly, fancy fonts.  But sometimes you need a funky, simple font....

Get this great font HERE.